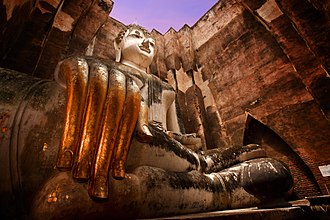 The city walls form a rectangle about 2 km east-west by 1.6 km north-south. There are 193 ruins on 70 square kilometers of land.[1]There is a gate in the centre of each wall. Inside are the remains of the royal palace and twenty-six temples, the largest being Wat Mahathat. The park is maintained by the Fine Arts Department of Thailand with help from UNESCO, which has declared it a World Heritage Site. Each year, the park welcomes thousands of visitors who marvel at the ancient Buddha figures, palace buildings and ruined temples. The park is easily toured by bicycle or even on foot.

Where Do We Go